PDF of this info is here

Inkscape can be successfully used with Design Space. This information can help. 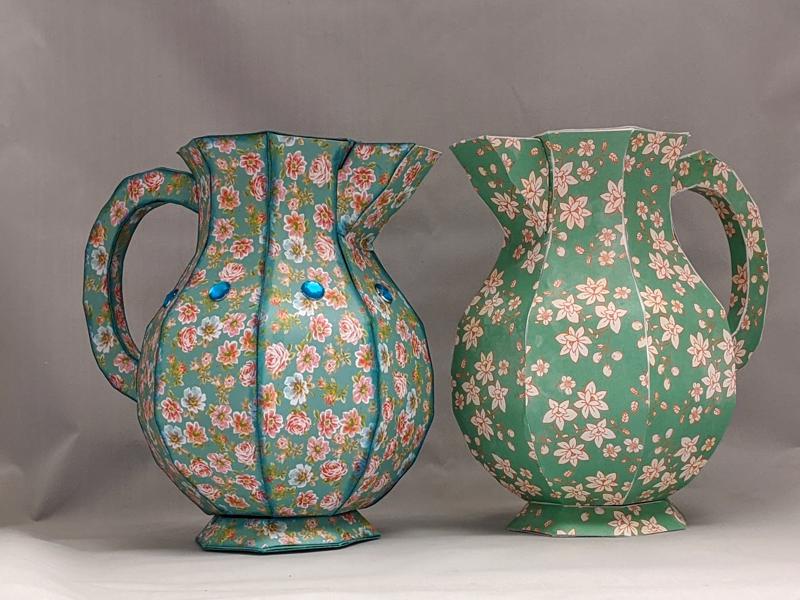 The lamps, the pitchers and clocks and other of my recent designs, make use of two Python programs written by my husband.  They work in conjunction with Inkscape 1 (beta or higher) and (links below) allow me to quickly make the pieces needed to create polygon-based shapes.  They are both very easy to use, and a tremendous help in getting designs up and running. Both the vase and shade on the lamp, and the main part of the pitcher used the upc.pyw program, and the base of the pitcher and lamp use the collar.pyw program.

I thought I would share some insights that I've learned -- mostly from things not working -- about using Inkspace 1 Beta and Design Space.  Some of these may well apply to other versions of Inkscape, but I haven't really tested one way or the other.

1.  When saving for Design Space, save as a plain svg.

3. Any paths that you want to assign fill colors to must be complete paths.  Design space does not love incomplete paths as objects. When in doubt, you can unify.  I've noticed that I can't apply (or at least see) a stroke around unclosed paths.  (that might be a preference... will need to investigate)

4.  You can import a bunch of svg files into a single svg document (hopefully all set up on similar parameters) , but be very careful about groups.   I have encountered a strange behavior where moving grouped paths will cause Design Space to mis-interpret the relative sizes of paths in the documents.  It is best to move ungrouped OR after moving , simply ungroup and regroup.   I haven't been able to replicate this with a toy program, but it absolutely does happen under some circumstances. I've also had problems with layers being understood by DS, and my choice is sometimes to remove them entirely, if nothing else works.

5.  Given the above caution, you can use groups in svgs saved for Design Space.

As an example, I made three svg files, each with a few paths.  I created a new file, and imported the three toy files into it.  Each came in as a layer with paths under it..  DS  had the size totally messed up.  I removed the layers and changed each set of paths to a group.  Still not right in DS.  I then simply ungrouped and re-grouped  each group and saved again.  DS was then happy.   After that I moved one group in Inkscape (without ungrouping it first).   The resul was that DS had the size of the other groups correct, but that one was now mis-sized. I ungrouped and regrouped it, and all was fine.

SO.... after playing with some simple svgs, what I discovered is that when a group is moved in Inkscape, it uses a transform(translate[...]) method.   DS does not understand this, so it messes up the import.  When you ungroup, then regroup, it removes this method and DS is happy again.